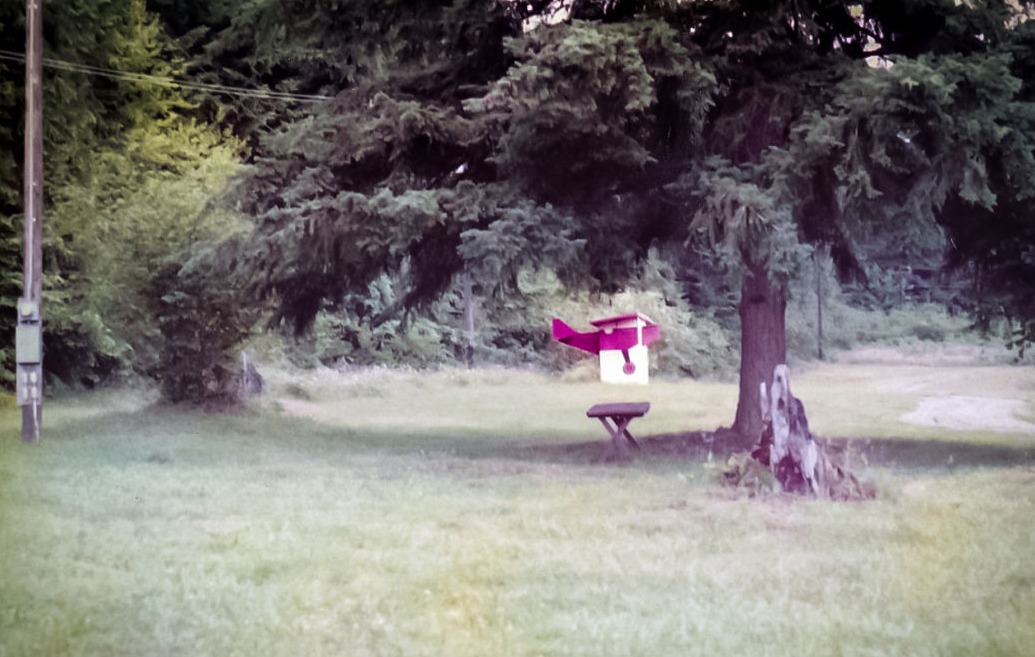 Mount Rainier Radio Control Society is quickly nearing it's 60th year as a club. Please take a look back & enjoy a bit of history - written a few years ago by one of the Founding Members - Don Sweasy, updated by Tom Randall.

Let's look forward to many more years at Pfeiffer Field with exciting new stories for the future!

In the early 1970’s the club found and rented our current location. It was known that the property would eventually be for sale, and, with that in mind, the membership soon began to consider ways to purchase the sixty-five acres when it became available. Bob Pfeiffer was the man with the answer. He was a retired Air Force Lt. Colonel and owned the Firgrove Model Shop in Puyallup. Bob also had the vision and dedication to help the club secure its own flying site. In fact, it was his idea to create the NW Model Expo. The goal of the model expo was to establish a fund to eventually pay for our flying site.

The NW Model Expo was a giant undertaking for the club. However, we were fortunate that Bob had many contacts in the RC industry, which was a big plus when doing such a massive project. Through a tremendous amount of planning, coordinating, and work by our membership, the first NW Model Expo was launched in February 1982. Profits from the first
model expo were slim due to huge startup expenses, but the club was now on its way.
In April 1984, the owner of our flying site property announced it was for sale, and as the property renter, the club had the first option to make a purchase. The club savings account was rather dismal so two club meetings were held to determine a course of action. The final decision was that everyone that could, would contribute money towards the purchase. In response, approximately 40 members contributed $40,000, which was ample for a down payment on the $100,000 purchase. The sale was completed in October 1984. The model expos were so profitable that the mortgage was paid off in the Spring of 1986. On July 4, 1986, the club held a gigantic mortgage burning party at the field.

Several years later, the club faced another problem. Flyers constantly overflew the 20 acres east of the field. This area contained no residences but would certainly pose a problem if a home suddenly appeared. In April 1994, the 20 acres became available for a little over $100,000 and the club decided to purchase the additional land. Mortgage payments were made for three years, paid with profits from the NW Model Expo. The MRRCS now owns the 20 acres, giving us our current total of 85 acres of space to enjoy our hobby.

Of course, the story of our club continues to this day. Numerous building parties resulted in many improvements that are often simply overlooked or taken for granted today. For example, the shelter was constructed. Then, as the hobby changed and flying e-powered models became more prevalent, electrical power outlets were installed at each table. Now, we can fly nitro, gasoline, and electric powered models, in all scales, at the same time.
Other improvements include a new tractor and garden equipment in the past the few
years, new drainage to keep land from shifting, and now a fund to keep the runway in good repair. When the recession hit membership was adversely affected. Our membership dropped, some services were cut, yet the club continued to survive and thrive. The pandemic of 2020/2021 has further proven the club’s resilience. Meetings were cut to a bare minimum in 2020, yet the club managed to stay afloat. While several local area clubs were closed to flying, ours stayed open due to the use masks, social distancing, and crowd avoidance. Members of other clubs started to look around for a place to continue their hobby and found us. As they say, the rest is history. Welcome new members.

In summary, you can be thankful for one of the best flying sites in the country. We should be appreciative of the members before us that had the foresight to ensure that the club owns its flying site. The NW Model Expo provided us with much needed funds, but the generosity and hard work of dedicated members has given us what we have today. We can thank Bob Ford, Dave Turner, Don Sweasy, Gene Iwanski, and many other club members that have since passed, for their untiring efforts. When you enter our site, you will see a “Pfeiffer Field” sign. Bob Pfeiffer passed away in February 1989. The site was named “Pfeiffer Field” in his honor.
As you enjoy the current, never forget the past.